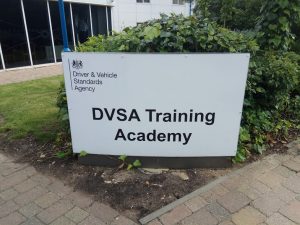 Cardington, oh, Cardington,
I still hear your learners crashin,
while I watch the indicators flashin’.

(That’s a Glenn Campbell reference in case anyone was wondering)

I recently decided it was time to bite the bullet and take the only driving test I hadn’t taken – The Cardington Special Test.  Created in collaboration with the ADINJC back in the 70’s it was designed to test ADI’s against the same criteria as Driving Examiners.

The test lasts 90 minutes and covers a variety of roads including motorways.

It’s £144, and somewhat quaintly can only be paid via cheque or postal order. On the dates I was offered appeared to only be conducted at 10 am on a Monday but I guess that could vary.

Originally it was a zero fault test, however, as only the very first couple of applicants achieved this, it was standardised as a two fault test, before becoming a three fault test around 20 years ago.

(The Diamond Special (now Elite test) was based on the Cardington and remains a two fault test, although unlike the Cardington no two faults are allowed in the same box)

The main issue I found with the test is that there is very little information around about what it entails.

I spent a couple of hours on a quiet estate in Pershore, practising arm signals with someone that used to teach them when they were required for the driving test (i.e. my Dad), as some googling suggested that they were still required on the test. (And a conversation with a Cardington examiner some time previously suggested they were now only done on the Cardington training area – best to be prepared I thought!)

So. for anyone interested –  on a turn or emerge,  it’s Mirror – Arm out the window – count 1 – 2 – 3, arm back in, mirror –  brakes, change down, arm out the window 1-2-3 and then back in and steer into the road. A common fault then was steering with your arm still out the window, or changing gear with your arm still out the window – i.e. no hands on the steering wheel! – You quickly realise that 40 odd years on from when this was standard, should someone appear in the time gap when your arm isn’t out the window, tough luck they have to guess where you’re going – and you can forget about taking first as you come up to an emerge – apparently it was all a lot harder in cars that didn’t have electric windows, and also had sliding windows!)

Anyway having confused the local residents for an hour or so (hey I had a top box on, they probably assumed I was just learning!) I was all set. 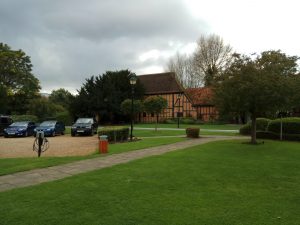 I’d booked a terrific hotel called The Barns for the Sunday night,  and while this isn’t a hotel review I’d fully recommend it – 4 star, around the same price as a Premier Inn and 5 minutes from the site (again some googling suggested that you can stay onsite at the DVSA , however, they didn’t offer it to me when I booked and I didn’t ask – Also when carrying out a reccy of the site on Sunday PM the gates were all locked up and there was no indication that the site was open so perhaps they no longer offer this?)  – The only downside was the food was a bit expensive.

I travelled down midday Sunday and took the opportunity to scope out the area, I’ve been to Cardington a few times before, but I wanted to have a closer look at the nearby roads, you don’t want to get off to a bad start after all, and I know there’s a confusing road that finishes in a dead end/bus lane at Shortstown nearby. I had a couple of 15-year-old test routes someone kindly sent me that I had a quick gander at on google maps, but other than that I’ve no idea where the test route will take me.

Anyway come the Monday morning it was off to HQ, and now it’s my turn to sit like a learner in the waiting room for the examiner to appear (at least at Cardington there’s free coffee)

The Examiner  appears and asks for my license check code details – (Seems unlikely that an ADI would turn up who was disqualified mind you) – off he goes presumably back to his office – He seems to take an eternity before he re-appears – Is this an attempt to psych me out with the waiting I wonder ? But I quickly put such thoughts aside as that’s not the DVSA’s M.O. and as much coffee as you want is included in the price.

The Examiner is back, for a quick pre-test chat – Basically, a much higher standard than Part 2 is expected, and this includes not signalling when there is no-one to benefit. He mentions this a couple of times so I guess this must be a common issue for ADI’s, however, it’s not an issue for anyone Roadcraft trained. I seem to remember another Cardington Examiner mentioning this in the past when I was quizzing him about the test.

There are grades to the test:

There’s the usual eyesight test in the car park, walk around the car before the Examiner hops in the passenger seat, notes down my ADI badge number and gives the standard start of test briefing.

Along with the usual spiel about “don’t worry if you see me marking things down I have to tick off things as we go along” to which I say “well If it’s more than 15 I’ll be worried” – For anyone interested it has its own marking sheet specifically for the test, they don’t use the DL25.

Then off we go, out the car park, down Paul Waller Avenue (I’d always wondered who he was so I asked – He was a Senior Examiner in the old days apparently) which goes to a 60mph so I get a move on down to the junction. (Since taking the Cardington test, new housing estates are in the process of behind built, which have access off Paul Waller and the DVSA main gates have moved to much closer to the roundabout, so I doubt it will remain 60mph for much longer)

I start straight away with a commentary and after a minute or so, the examiner says there’s no commentary requirement (which I knew) however I prefer under test to give one to aid concentration and allow an insight into my thought process and do so throughout the test, which is good I immediately start to give a deviation signal with no-one around and then correct myself.

To cut a long story short the test takes in all the manoeuvres  (inc right reverse) and an independent drive section. Not the new manoeuvres or the satnav, however, it will probably be adjusted to include these when they become part of the normal test (which is a shame IMHO) as well as the emergency stop.

There are no “Show me/tell me questions”

I also (safely) took the wrong exit at a roundabout (someone was about to cut me up and discretion was the better part of valour in the circumstances).

Somewhat disappointingly I wasn’t asked to demonstrate arm signals, so I was denied my opportunity to terrorize the local residents of Bedford in the same way I had Pershore.

Anway I passed Grade A   – Fault for cutting a right-hand turn, which I knew as I was doing it and had a view,  however, Bedford seems to have stopped bothering renewing road markings and picked up a fault. You might think what have the markings got to do with it but the junction was on a curve and I couldn’t judge the exact centre until I arrived in a slightly off position.

Other comments – couple of occasions I indicated when the examiner wouldn’t have (with regard to persons to benefit, I’ve always taken a wider view of people in the vicinity, better to be safe than sorry) – I hung on to 3rd a little too long on occasion – An Eco Fault but not marked, and should have done an overtake sooner on a tractor after I took the wrong turn I mentioned above – I hesitated under test conditions, when I could have just done a “fly past” overtake  and ended up stuck behind it on double whites.  Normally I’d just have gone for it, but I thought being a DVSA test I’d hold back – sometimes you can’t win!

As for faults not worthy of mention – I don’t know as he didn’t mention them! –  from my perspective early on I thought the left reverse was slightly shakey, I could have been in a bit tighter (I wasn;t massively wide or anything but it didn’t go as smooth as usual. That passed without comment.

The next junction after moving off from the left reverse I was about to emerge when the bite felt slightly off and I realised I was still in 2nd and hadn’t knocked it into first when I stopped. I corrected this and moved off without incident which wasn’t commented on.

In comparison for the New Entrant DE test (which does include a commentary apparently), I’d have been marked Gold. (And subsequently did with zero faults)

In around 7 days you get a certificate in the post and the marking sheet (you don’t get anything to take away with you at the end).

Anyway in the world of Advanced Driving tests that’s it for me – All the Police, Ambulance and Civilian ones done. I’ll keep up the RoSPA Diploma and the IAM one and that’s it.

As this is one of the more higher rated websites for the Cardington Test, I thought I’d now include this update:

The DVSA have now dumbed down the Cardington Test:

Instead of including all the manoeuvres it now only includes two plus a satnav element:

You’ll get a grade from A to D for each skill you’re tested on. You’ll also get one of the following as an overall grade:

I would imagine the scoring is in line with the examiners’ recruitment test which I did in 2018 and which the marking sheet can be seen in the CPD area of this site.

The Cardington Test was always intended to be in line with the examiners’ standard, its a shame this move from fault-based assessment was done without any consultation from the industry.