How do tickets for driving offences work?

In the latest in our “mythconceptions” series, this post should hopefully clarify the process of fixed penalty tickets in relation to motoring offences.

Originally back in the mists of time motoring offences were solely dealt with by police officers using a process called “Report for summons”.

On deciding to deal with a traffic offence, the police officer would fill out an “offence booklet” or “summons booklet” the exact name varied by area, and the offenders’ details would be processed, and they would receive a summons to a magistrate’s court. They also had the option to pleading guilty by post.

This process technically still exists and in fact can be used for any offence, is sometimes used more commonly by small specialist police forces such as Parks Police.

The main problem with the system was that it created a lot of work for magistrates’ courts dealing with effectively trivial offences such as parking on double yellow lines, and that penalties could vary by court area.

This led to the introduction of the Fixed Penalty system in the late 1950s for minor offences, followed shortly after by the introduction of Traffic Wardens in 1960. The system was later expanded in the 1988 Road Traffic Act.  Only one fixed penalty ticket could be issued on any one occasion. If multiple offences were committed the offender had to be reported for summons.

There are two types of fixed penalty ticket – Non-Endorsable and Endorsable, and a driver cannot be “forced” to accept a fixed penalty ticket. Although rarely given the option at the roadside, the police officer usually saying something like “I intend to dispose of this matter by issuing a fixed penalty ticket”, a driver is entitled to refuse and ask for the matter to be dealt with by way of summons. Even if the driver accepts a ticket at the roadside, the ticket had part of the form that could be filled out and poste requesting a court hearing instead. This remained the standard process up until 10 years ago.

Non-endorsable fixed penalty tickets were issue for minor offences, a small example of which is shown below. (Police officers are issued with a book listing codes for each offence)

For many years from the  90s to early 21st century the Non-Endorsable ticket penalty was set at £20, this later increased to £30, then £50, then further offences were added to the list, notably No MOT is £100 non-endorsable offence, and some existing offences were also increased. Failing to wear a safety belt was for years a £30 Non-Endorsable but is now a £100 non-endorsable.

Non-endorsable fixed penalty tickets could also be left affixed to the vehicle, usually stuck on the windscreen (depending on the offence). 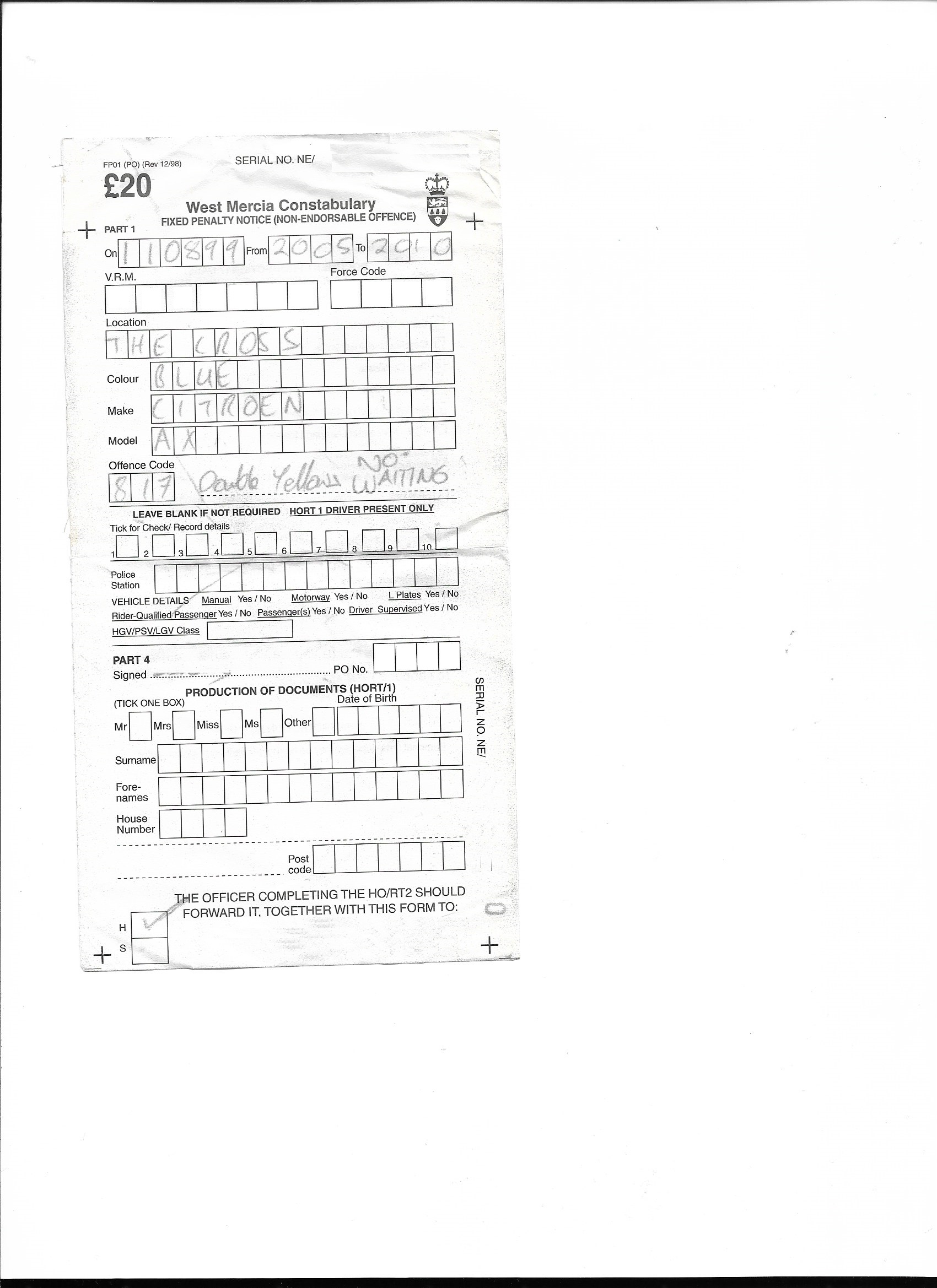 By far the most common non-endorsable tickets issued were for parking offences or seat belt offences. Then in 2004 parking offences started to become “decriminalised”. This meant that they were no longer enforced by the police but turned over to the local council.  Police Traffic Wardens were slowly abolished, the last only a few years ago, and replaced by “Civil Enforcement Officers” Almost every area in the UK now has decriminalised parking enforcement, and offenders are issued “Penalty Charge Notices” or PCNs. (Private parking companies usually try to make their tickets sound more official by calling them “Parking Charge Notices” as well)

Should you dispute a PCN the appeal process is by tribunal, and the penalty ultimately enforced by the County Court should you fail to pay, thereby removing the entire process from the criminal court system.

This has the effect, that a police officer seeing a vehicle parked on double yellow lines has no powers to issue a ticket, or even report the driver for summons as the offence is ‘decriminalised’.
The police do however retain some enforcement powers for unnecessary or wilful obstruction offences.

The lines are blurred even further, as in some areas Police Community Support Officers are authorised by the council to issue PCNs for parking offences.

Endorsable fixed penalties operated in much the same way, except the fine is higher (Currently £100 for most offences) and you receive 3 points on your license.
The driver either had to surrender his license at the roadside (the ticket had a small envelope built into it for this purpose), or at a police station.
Before issuing the ticket, the police officer had to be sure that the driver had less than 9 points on the license (if they had more and you issued them a ticket for 3 points, which took them to 12 which was a disqualification under a totter and could only be done by a court) and unlike today there was no easy way of checking this at the roadside.

TOR or Traffic Offence Report
The growing use of Speed Awareness Courses, and eventually other types of course as an alternative to a penalty, added another complication. It was possible for a driver to receive an offer of an awareness course when detected by camera but in the same circumstances be issued 3 points when stopped by an officer.  As a result, most forces have replaced Endorsable and sometimes Non-Endorsable tickets by a booklet filled out at the roadside which is then sent off…. and we’re back where we came in at the start of this article.

The difference is TORs are reviewed by an admin team to determine if the driver is entitled to attend an awareness course or not (you can only attend one for the same offence within 3 years, the second time will be a penalty), if they are entitled to be offered a fixed penalty/endorsable fixed penalty or if this will take them to 9 points and so on. The process is technically the same, but the “ticket” is issued by post and not at the roadside.

Finally fixed penalties were never “on the spot fines” (the only exception being foreign nationals who were likely to leave the UK) – You always had 28 days to pay the fine or the option to go to court.

There are other types of fixed penalty still used by the police for public order offences, councils have the power for offences such as littering (although some use the PCN process), and some agencies.

There is one other type of ticket still in occasional use – VDRS or Vehicle Defect Rectification Scheme.  Instead of issuing a £40 fine for a blown bulb the driver is given a “ticket”, which means they must fix the problem and have an MOT station stamp the ticket to show it’s been fixed. (Some forces also did an informal scheme whereby a police officer at the station could stamp the ticket. The driver has 14 days return the ticket, but that didn’t mean they could drive around with a defect for 14 days!