Driving in the UK on Foreign License and UK Provisional

This post should address some of the mass of misinformation that is out there claiming that the UK Provisional somehow replaces any existing entitlement to drive.

From Q417: I have a foreign non-EU driving licence, how long can I drive on it in this country? (askthe.police.uk)

I have a foreign non-EU driving licence, how long can I drive on it in this country? 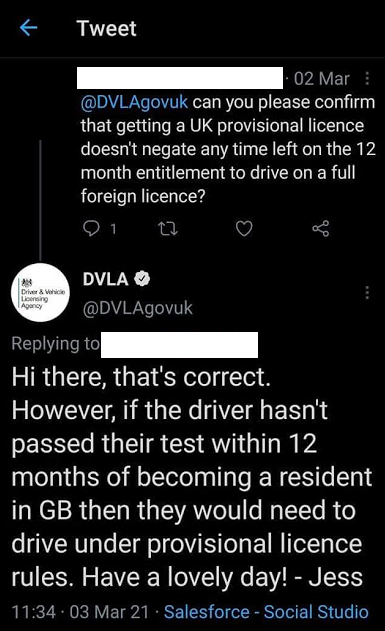 For those that don’t trust the police response, here’s a couple from the DVLA

“I can confirm your sister may continue to drive using her Turkish licence after applying for a GB provisional, provided she is still within the 12 months of becoming resident in GB.”

and in answer to a similar question:

“New residents may drive here on the strength of a valid non-EC/EEA driving licence or IDP for a period of 12 months from the date he takes up residence here.  This is provided for in British law through Sections 87 and 88 (5)(b) of the Road Traffic Act 1988 and Regulation 80 of the Motor Vehicles (Driving Licences) Regulations 1999.  To ensure continuous driving entitlement beyond that 12-month period a full British driving licence must be obtained, either by way of exchange of a designated country licence or by passing a British driving test.

In fact the DVLA have so many enquires for this that they seem to have a standard response now which reads in part:

“As a resident, provided your full licence remains valid, you may drive any category of small vehicle shown on your licence for up to 12 months from the time you become resident. To ensure continuous driving entitlement a provisional GB licence must have been obtained and the relevant driving test(s) passed before the 12-month period elapses. If you obtain a provisional licence during this period, you will not be subject to provisional licence conditions e.g. displaying L-plates, being supervised by a qualified driver or being precluded from motorways.

However, if you do not pass a test within the 12-month concessionary period you will not be allowed to drive as a full licence holder and provisional licence conditions will apply.

As you can see above the issue of a UK Provisional license does not in any way override or replace the existing entitlement to drive until the 12-month period ends.

This means that a foreign license holder is still within the 12-month period, they can drive to and from a driving test unaccompanied. (They will need to display L plates on the driving test, but this is DVSA test requirement and not a legal requirement)

The part that seems up upset a lot of instructors for some reason, is that this remains the case, even if they fail a driving test.

Failing the test does not negate any remaining entitlement to drive in the UK. On first glance it might appear strange that someone who has failed a driving test is then still allowed to drive but this is the situation.

In fact, when you stop and think about it, this makes sense, if as shown, the issue of a provisional license doesn’t affect the existing entitlement to drive, then why would the failing of a test to convert that licence to a full one affect it?

This isn’t any different to someone having grandfather rights to drive a minibus, turning up for a D1 test (they must display L plates as well for the test) and failing the test and driving away.

Where is this in law you might ask?, it’s in the The Motor Vehicles (International Circulation) Order 1975,

Recognition of international licenses is because of the UK signing a UN treaty going back to the 1920’s, its not simply a law that we can modify without changing the treaties.

This is further codified in the Motor Vehicle Driving Licenses Regulations:

(a)the holder of a relevant permit, and

shall, during the period of one year after he becomes so resident, be treated for the purposes of section 87 of the Traffic Act as the holder of a licence authorising him to drive all classes of small vehicle, motor bicycle or moped which he is authorised to drive by that permit“.

There is no provision anywhere in the regulations, stating that a provisional license removes this entitlement.

What happens if they pass the UK test, and they are still within 12 months? Won’t they have two licences?

Technically yes, you don’t have to return a non-exchangeable licence to the DVLA, but it won’t make any difference, points and bans are recorded against the person not the licence. i.e. if you were banned from driving in the UK you couldn’t go on holiday and return with a foreign license and drive legally in the UK, you’re still banned.  (In fact, the DVLA create a “ghost” or “shadow” record to record points etc awarded against foreign license holders anyway).