So let me start by saying, I don’t like track driving, it doesn’t really interest me driving round and round the same track with people of similar skill levels with nothing coming the opposite direction.

If you like it, good for you, but don’t kid me it’s on road applicable.

That said, I am a big believer in what John Miles wrote nearly 40 years ago:

I will drive by the methods I now use until somebody shows me a better way, and I accept the possibility there may be a better way. Driving has been my hobby as well as my work for many years, and I have discussed every aspect of it with hundreds, probably thousands of people, including students other police drivers, driving instructors and racing and rally drivers, and for my own satisfaction I have tested things which they have suggested. So far however no one has been able to improve on the basic techniques I was taught at police school and which I have since taught to others. Nevertheless, I have always tried to impress this on students, the other fellows point of view may be equally valid.

Anyway Porsche were advertising in the MSA newsletter for people to try out to become “driving consultants” as long as they were ADI’s with Police Experience or Track Experience at their Silverstone base.

Naturally I’m an expert at Silverstone, I drove it many times in the 1992 Microprose PC game Formula One Grand Prix, so thought I’d be well qualified!!

–  but it turns out they have a car park off the main track that they actually use for their ‘experience’.

I said to my PDI when I told her about it, “there’s no chance I’ll get this as I’m not a track driver, it’s a different style of driving”.

The days click by and early one morning I get up and rush through the pouring rain on the M40, t0  turn up at the requested time of 9 o’clock. Walking in, the receptionist asks for my driving license.

Now the email I had from Gordon Robertson the “Chief Driving Consultant” made no mention of this.

Why I’d need a driving license to a drive a glorified VW around a off road car park I’ve no idea, but fortunately they have some ‘hotline’ to the DVLA where I just give my name and postcode and they give some secret code to Porsche.

So you might think, but it appears Gordon Robertson’s presumably too busy to bother to meet me and the others at  9 o’clock the time he’s asked us to come,  so we sit around in the cafe upstairs for 30 minutes. – 30 minutes I might add I could have had extra in bed before he deigns to grace us with his presence.

That immediately gets my back up even more than being asked for a driving license, because I value punctuality.

At that point we go downstairs into a meeting room to watch the most boring PowerPoint presentation I have ever seen in my life, (and I’ve worked in IT so I’ve seen a few) including a corporate video of the separate events at the site.

Funnily enough I’d seen that already, seeing as how I’d looked at the website before attending 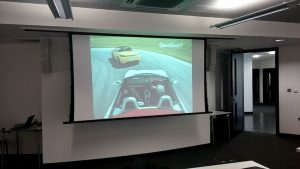 Do you know how many cars the Porsche experience valet  a year?

Do you know how many cars the experience has on fleet?

Do you know how many tyres they replace?

Do you know how many times some customers have been?

Personally I’m not the slightest bit interested, but Gordon does and he can’t wait to tell you.

It’s at some point during this presentation that he describes himself and his team as an ‘Elite group’ so I immediately think ‘hmmmmm’ or other words consisting of asterisks when posted on a website.

Now I’ve nothing against elite groups, but it’s usually a title bestowed upon you by others not one you give yourself. 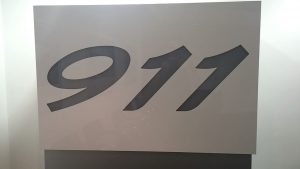 Now its some kind of 911 super duper turbo thing but it’s an auto, and personally I’ve as much interest in driving an auto as I have a horse and cart.

So this chap runs down this list and ask’s if there’s anything I want clarification on and I say ‘hmm what’s this split mew braking (sic)” that’s on his sheet.

Anyway without boring you with the details, I lead him on with a few questions but he obviously doesn’t get the point so I figure I’m wasting my time :-

The (sic) is there for a reason.

It’s cats that mew – the real name is Split mu or μ.

Google it if you like but its a fancy name to confuse you that basically means if you brake and one side of the car is on a surface with a higher level of friction the car will spin.

Or at least it will if you’re about 80, drive a Morris Marina and are in the habit of heavy braking with one side of the car of tarmac and the other on gravel or ice.

No doubt sounds good to the punters though, and as we used to say back when I worked in retail “Bull**t baffles brains”

I actually wanted to ask “is that seriously a cassette player under the CD slot?” 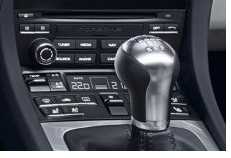 I mean it looks like a cassette slot to me, and I know vinyl is becoming popular again –  or maybe Porsche have sold old radios in stock to use up.

Anyway he goes around the various stages on the site , showing me nothing at all although how you’re supposed to give a demo of what they expect without being shown first off your guess is as as good as mine.

The main points that stand out – on the brake swerve ABS demo set up in a motorway scenario, they bizarrely expect you to stop after the swerve.

Why would I stop? A question I asked the ‘elite trainer’ and the answer was “lane 2 might be blocked so you’d have to” – “in which case I’d swerve to the left and use the hard shoulder instead” – Well it’s good you’re looking for an escape route but that might be blocked as well”

Well I don’t know if you’ve ever noticed? –  but even Porches have this big piece of glass in front of a driver called a windscreen – Why the hell would you be accelerating towards 4 lanes of stationary traffic to such an extent as you’d have to do a brake swerve? – And if that was the case why would you? Is there a going to be much difference between the cars you hit at that point?

The Split ‘mew’ – “did you mention how you didn’t have to correct the steering much’ or words to that effect.

After all this the ‘Elite’ trainer then decide to try and bore me to death with a description of how the ESP worked and the fact it was a Bosch system and had 6 different types of sensor.

I a couple of minutes when I was convinced he was going to get the wiring diagram out, I started giving him every body language hint in the world ,but he’d obviously not been on an NVQ level 1 NLP curse and he was going to keep delivering his script regardless of if I asked him for a rope or not……

Then we move on to the skid correction, whereby the ‘elite trainer’ didn’t like my pull push. Police drivers are apparently ‘wedded to pull push’ and it looks messy doing skid correction at speed.

Well I’ve been to hundreds of accidents/collisions in my time and I never attended one where a witness said, “well he crashed into the tree and killed himself but his steering looked really fantastic”

There’s a reason the police are ‘wedded’ to pull push and have been for 80 odd years – It works all the time. It doesn’t matter the situation.  Yes there might be slightly better steering techniques in any given situation but that requires the presence of mind to use them and change how you’re steering in potentially a split second. Pull – Push always works and is the safest method.

By this point we’d returned to base and the ‘Elite’ consultant had popped back in to use the loo. I’d already got my coat on by this time, as  I’d seen enough and it was quite clear they wanted track instructors,  but he came back out and insisted I coached him for 10 minutes round the track.

This then finished with some NVQ Level 1 coaching questions about how I felt, but fortunately having reached NVQ Level 2 myself, I ignored the claptrap and forced him into giving a wrap up.

After that, and despite offering an ‘optional’ lunch, it appeared you did in fact have to stay, as once again Gordon was too busy to bother seeing me.

(I didn’t bother with the food, as nothing on the limited menu caught my eye and it turned out the courses were the size of a postage stamp, but again this is a driving blog not the galloping gourmet)

Anyway we then went downstairs back to the meeting room.

Again Gordon was still too busy so we had to wait around in the room by ourselves for another 30 minutes until he could be bothered to come and see us.

So an hour after I could have left, he wrapped up with a short Q & A session.

The main point is it turns out that after being accepted as an ‘Elite’ Consultant, on a zero hour contract you’d be expected to turn up to the base regularly for 6 months  (or 2 months if you didn’t happen to be doing anything else and could do 3 days a week) all for free, for training at the end of which if you didn’t pass you wouldn’t get a job anyway and if you did it was intermittent work at £200 a day for a maximum ten hour day with travelling each side of it.

At the point where I was kept waiting in a room for 30 minutes after having to stay for an optional lunch I’d decided there was not a hope in hell I’d work for these clowns, but the final email was pretty much what I’d expected in that I was ‘very road focused’ and would benefit from ‘higher performance’ (i.e track coaching) experience which make me wonder why advertise in the MSA to start with? Surely “hairdressers monthly” (that’s a low blow) would be a better bet?

Basically it was a waste of time but I did to get drive a 911 around for a bit and have a go with the launch control or whatever it’s called and the full day would cost a member of the public around £300, if as a none Porsche buyer you bought an experience day.

If you do though, I’d make sure you bring your own sandwiches.

Still as we used to say in the Police, it’s easy to appear to be an (elite) advanced driver, if you drive up and down the same roads (track) all day….

Any cookies that may not be particularly necessary for the website to function and is used specifically to collect user personal data via analytics, ads, other embedded contents are termed as non-necessary cookies. It is mandatory to procure user consent prior to running these cookies on your website.