Until 2014 ADI’s were graded as follows:

An E Grade could only be awarded for the first test, usually 6 months after qualifying and meant that you hadn’t reached grade 4. Other than that;  grades 1,2, and 3 meant you had to re-sit the test and after 3 goes you’d be removed from the registar and have to re-qualify.

The vast majority of ADI’s were 4 along with a smaller number of 5’s and a couple of thousand 6’s.

As there was  a ‘role play option’ it was possible to get a grade 6 just be rehearsing the subject as the examiner in role play could only make mistakes relevant to the subject selected.

This became outdated and so the role play option was removed and the test itself revamped. There are now only three options – A or B or fail.

I took my first standards check under the new system, using an IAM Masters (Distinction) Holder, who is also a IAM National Observer, and a IAM Masters Mentor as the driver and I was awarded an A Grade, which futher shows that its not the level of the pupil  that counts but it’s the level of instruction. 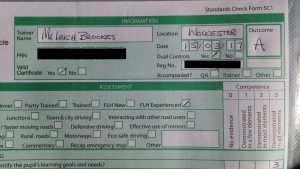 I can offer bespoke Standards Check training, ranging from a simple training session to sitting in on a lesson with your client and anything in between.

Is it all about coaching?

The short answer is No – You don’t need to go on expensive coaching courses and start using mind-maps or scaling everything 1 to 10 either.

I’ve written a couple of article giving some more tips on the SC here:

What are the Stats?

You’ll notice there’s now more 5’s than 4 contrary to what I wrote above. That’s because they started retesting on the new system focusing more on the lower scores.

There’s also around 4500 cancellations, failure to attend and where the results were being awaited input.

Those 254 are just a snapshot for that month, they will either try again and pass or fail, and so on.

There’s a more detailed breakdown here: http://www.adinjctraining.uk/dvsa_standards_check_statistics.html suggesting that 1 out 6 standards checks is a fail.

If you want Standards Check training in Worcestershire give me a call.

This is similar to an Ofsted inspection in that an examiner sits in on a lessons and rates your performance against a set of competences.