The offence committed by most drivers.

If you are driving a ‘mechanically propelled vehicle’ on a road it’s an offence to fail to carry your driving license, insurance certificate and MOT. You must be able to produce them on request to a Police Constable in uniform.

Its right there in the Road Traffic Act 1988 sections 163 onward.

(1)Any of the following persons—

(a)a person driving a motor vehicle on a road,…..
must, on being so required by a constable, produce his licence for examination, so as to enable the constable to ascertain the name and address of the holder of the licence, the date of issue, and the authority by which it was issued.

If a person required under the preceding provisions of this section to produce a licence or state his date of birth to a constable fails to do so he is guilty of an offence.

Any of the following persons—

(a)a person driving a motor vehicle (other than an invalid carriage) on a road, or…..

(b)in relation to a vehicle to which section 47 of this Act applies, a test certificate issued in respect of the vehicle

So why aren’t more people prosecuted?

Well actually because there is a defence for both charges:

(a)within seven days after the date on which the production of the certificate or other evidence was required it was produced at a police station that was specified by him at the time when its production was required, 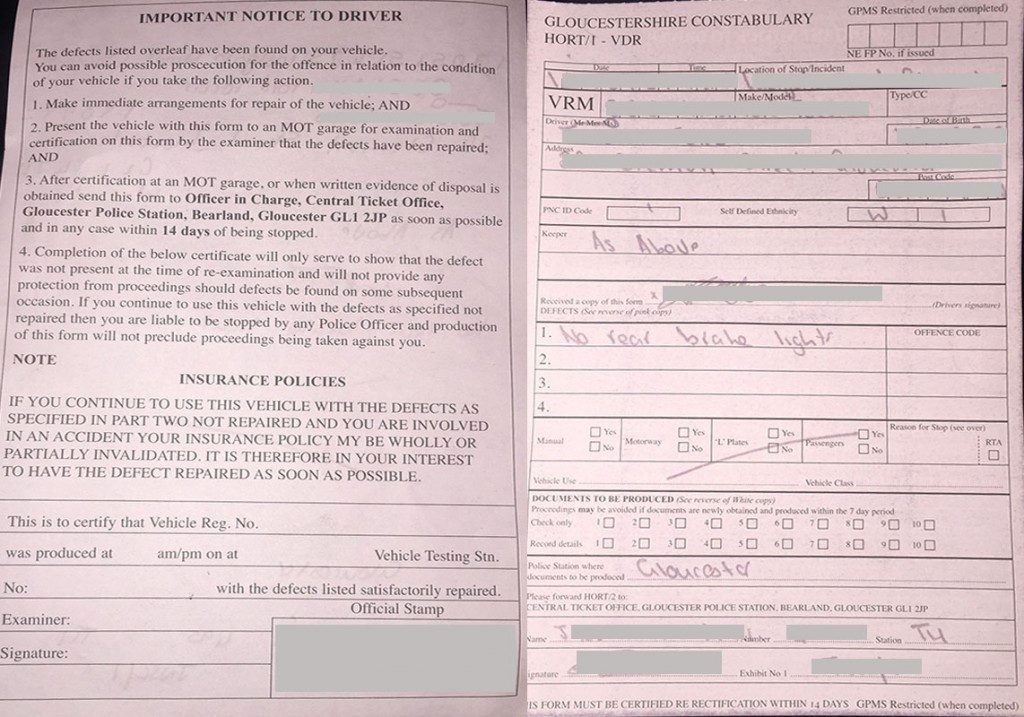 The form used to produce the documents was commonly called called a ‘HORTI’ or a producer actually Home Office Road Traffic (form) 1 and was often combined on other forms such as VDRS or Fixed Penalty forms.

The difference between ‘Check’ and ‘Record’ details was simply for a check the counter clerk just checked they were in order , but for ‘record’ they had to write down all the details in an HORT2 book.

All this is academic now as the details are available from the roadside via the police computer and most if not all forces have scrapped the HORT1 The only time it remains in use in the National Collision Report Form, where document production is still required in the case of recordable accidents.

Which leads on to :-

Do you have to report an accident to the Police?

The requirements at the scene of an accident are all in section 170 of the Road Traffic Act.

The main point are:

You must STOP. Immediately

This is dependant on the exact circumstances, there is no requirement to wait indefinitely in a deserted country lane.

As long as you stop and give your details listed above to the other person involved or someone acting on their behalf then there is no requirement to report this to the police.

If you don’t give your details to anyone?, If there is no one there, you must report to the police in person, as soon as practicable, (and within 24 hours – note you don’t have 24 hours to report you need to go to a police station as soon as possible).

What if it’s an injury accident?

Well actually its exactly the same, but with one difference –  you must supply your insurance details as well.

It might surprise you to know that even if you were to severely injure a pedestrian, as long as you stop, and give the details discussed above to them, or someone acting on their behalf, you’ve carried out all of your legal obligations and don’t need to report it to the police.  (It’s not sufficient to just wave an insurance certificate in front of someone, it must be produced in the sense that the person is able to satisfy himself that an effective insurance policy is in force)

There are no circumstances in which a driver must report an accident to the police, as long has they have fully discharged all duties at the scene.