What with all this talk of learners on Motorways lets take a quick look at the terminology.

Prof Lisa Dorns recent DVSA published book “The Official Guide to Better Driving” makes the assertion that originally the lanes on motorways were originally officially called  the slow lane, the middle lane and the fast lane, by which is why they’re still called that today.

The problem is, it’s not true.

The first Motorway was the Preston-By-Pass which was only 2 lanes anyway!

When the Preston-By-Pass opened in 1958 there was an official “Motorway Code” published – (which you can see a scan of here) to accompany the highway code. That makes no mention of it.

The next edition of the Highway Code in 1959 incorporates motorway advice and also doesn’t use that terminology. 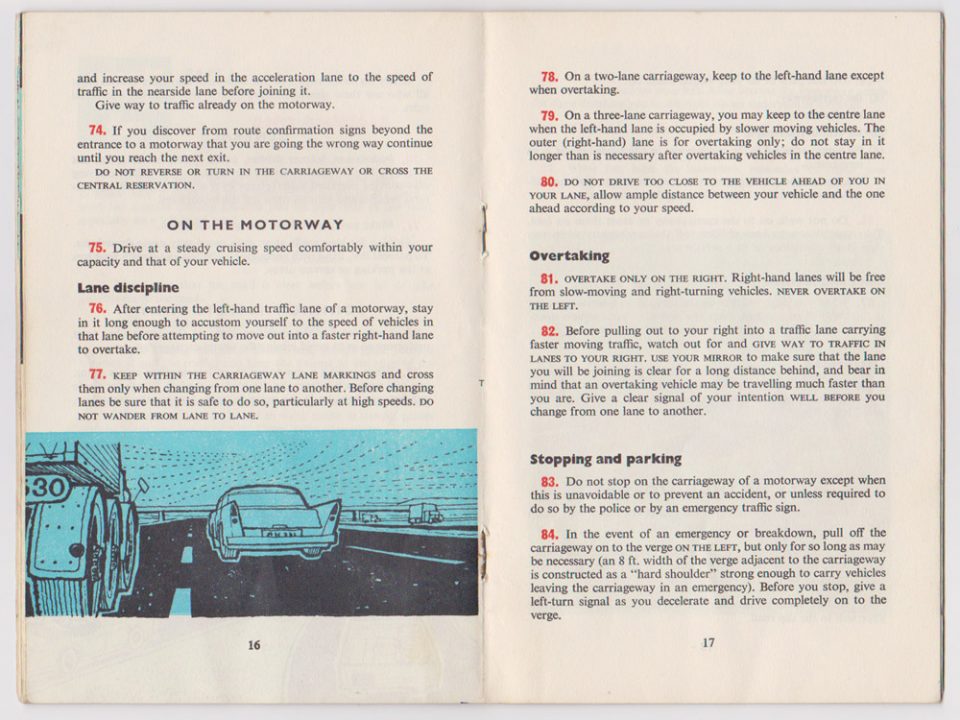 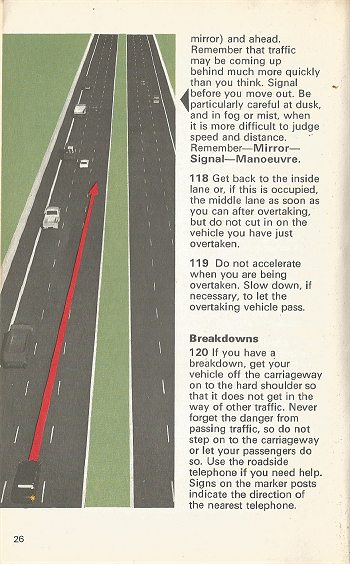 Even the Motorway Regulations themselves have contained the terminology.

The semi-official terminology at the time was nearside lane, middle lane, and off side lane.

Emergency services terminology has always been lane 1,2 and 3 which is reflected in Roadcraft.

Marker Posts – The number on the marker post is actually the distance in KM from some fixed point (the start of the motorway, the city centre, or county boundary etc)

“Pig Perch”  – The “Police Only” observation platforms. Originally these were all ramps you drove up but after a few attempts of people launching themselves off the end, they were all rebuilt and now you reverse up onto them from the hard shoulder.

There’s a not-so-secret M5 Junction “7A” slip at Severn Stoke  (Obviously you can’t use it unless you’re an emergency vehicle, (technically the top of the access road itself doesn’t form part of motorway regulations) – somewhat bizzarely at one point Google Maps did actually label this 7A!

Ever noticed how you can only get on Eastbound at the M42 Junction 1, Forrest Island?, if you want to go on the M5 you either have to go to all the way up to Lydiate Ash or all the way down down to Junction 5 M5?

Yeah?, well so did the Police!, that’s why there’s another not no secret Junction ,  off Barnsley Hall Drive, Bromsgrove for the Motorway policing base that used to be there.

(Again obviously you can’t use this unless you’re an emergency vehicle and its probably gated off anyway) – There’s no ‘off-ramp’ as you’re right next to the exit.

While we’re on the subject – Exiting via the Services Rear Access (Not illegal – If it was the staff wouldn’t be able to use it either.  It’s technically a privately owned road, so they could could issue their own civil penalties just like private parking penalties if they wanted but it’s not mentioned in motorway regulations as an offence, and there’s no police fixed penalty (or otherwise codes) for it.