Fend off – Fend on

This is a brief article talking about safety positioning when temporarily blocking part of a carriageway – for example to protect the scene at an RTC.

The vehicle is positioned with the front towards the offside of the carriageway.

This maximises the visibility of the rear markings as well as side markings and from a distance the vehicle appears clearly stationary. 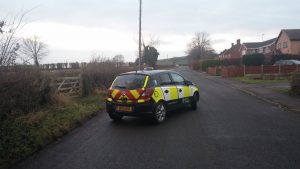 The vehicle should fill the lane or section of the carriageway that is going to be closed.

Note the direction of the front wheels – turned facing away from the active part of the carriageway.

On multiple lane carriageways the “Fend On” position which is the reverse of this, may also be used, dependant on which side you want the traffic to pass on.