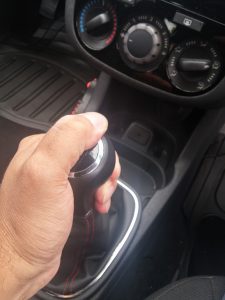 One of the most common observations by Police trained drivers, Rospa examiners and IAM examiners, is that frequently candidates are always one gear higher than we would be in the same situation.

Often because they are either afraid or aren’t aware of how to use the full power band of the engine, I’ve taken on learner from other ADI’s who keep changing up far too early on the mistaken belief that it’s more economical (or realistically they have no belief but they’re told by an ADI to keep changing up at 2500rpm) and that they should get into a higher gear as soon as possible and stay in it for as long as possible.

To which I always say the same “Have you ever ridden a pedal cycle? – Next time try changing into top gear and staying it and see how much hard work it is” as car engines are the same.

Well as I’m getting a bit tired of being thrown around the car when going around roundabouts this year, I thought I’d offer some comments on that.

Basically the main mass of a vehicle is sat on 4 springs which are in turn attached to each wheel. The main mass is the sprung weight and the unsprung weight is the wheels and suspension components on the bottom.

Slight acceleration causes the mass to shift and these springs to compress making the vehicle and occupants feel ‘settled’ on the road.

The higher the centre of gravity of the vehicle the greater the potential for body roll – That’s one of the reasons a Ford Galaxy doesn’t corner like a M3 Sport.

The passengers should always be held comfortably in their seats by accurate use of acceleration – not pinned back or allowed to roll around.

So after that digression into the Janet and John of suspension technology :-

What gear should we use for roundabouts then?

That way I don’t roll all around the inside of the car when you try to go around it in third because you don’t have sufficient acceleration response to bed down the unsprung weight of the vehicle.

We match the gear for the speed – 2nd gear in my car and most cars will go around 50mph easily, so how fast do you want to go around an urban roundabout unless you are response driving?

We are approaching a roundabout  – 25ft before the roundabout like any other hazard we must have the braking finished and the gear engaged, be planning to stop and looking to go, giving us time to look right ahead and right, use the horn and stop if we need to do so.

We can stop in any gear, but if we aren’t stopping , then to slow down to the speed necessary to negotiate the hazard (roundabout) and looking to slot into a gap then we need a gear that allows flexibility between 10-30mph while giving acceleration sense to balance the vehicle through a curved path.

We don’t accelerate when we’re steering – we set the speed in the acceleration phase and then maintain it around the roundabout, increasing speed once the wheels are straight on the exit path.

I know there’s all this cobblers about having to go through IPSGA again when on the roundabout but the original system was solely concerned with a signal and then second acceleration phase phase on the exit path once the wheel were straight.