Can Instructors use an Ipad on the move?

In light of the below court case the Goverment (assuming that they get re-elected etc etc), have stated that they will amend the legislation to prevent the holding of a mobile phone for any purpose to close this “loophole”  by next Spring.

What form the wording of the legislation take we don’t know. We could be back round again to the original argument that a tablet without a Sim Card cannot be a mobile phone or be connected to the internet, and the anomaly that its legal to hold a digital camera or an Ipod (remember those?) but not a phone.  They have stated that no ban on hands free calling will take place.

It becomes more bizzare when you think of the many vehicles with built in touch screens, like the massive one in the Tesla,  that link to the drivers phone for things like music playback and displaying messages etc, that it’s perfectly legal to use.

The High Court has today handed down a Judgement, which clarifies the offence of using a mobile phone whilst driving. The conclusion is that the offence is not committed unless it is proved beyond reasonable doubt (by the Prosecution) that the phone was being used for an ‘interactive telecommunication function’ at the time of the alleged offence.

The High Court has agreed that using a function on a mobile phone which does not involve ‘interactive telecommunication’, is not a mobile phone offence.

Some further thoughts on this promoted by the recent DVSA release about the roll out of examiners using Ipads and suggesting that supervising drivers can’t hold “technology”.

S110 does NOT prohibit the use of “technology” whatever that is defined as?   Can you not hold a digital watch while supervising a learner?, what about an Abacus?, is that allowed but a calculator isn’t?.

As seen in the below article S110 prohibits the use of an “interactive telecommunications device”, and we see above that the recent case of DPP v Barreto  in the High Court (which is binding on all lower courts until the CPS appeal (which my souces suggest they won’t) or another case relying on this verdict is appealed to the Supreme Court) clearly established that a S110 offence only involves the sending and receiving of a message and not, for example (in the actual case) using a mobile phone to take a photograph.

I remember from my own police training there is nothing in law to state that supervising driver has to be in the passenger seat. You could be supervising driver from the rear, a position in which you could not take control of the vehicle and nothing appears to have changed in this regard with any case law I could find.

The S109 offence the DVSA cover,  by stating that a “privacy screen” will be in use. I’ve seen similar devices used on displays in Police stations in my time, which allow only the person looking directly at the screen to see what’s on it and not anyone looking from an angle.

I personally don’t use an IPAD or Tablet when teaching so I’m not seeking to defend it one way or another some seem to be suggesting the law suggests one thing when it doesn’t. 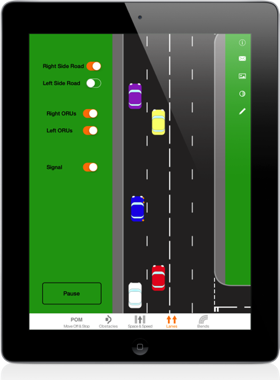 Can Instructors (or rather supervising Drivers) hold an Ipad (or similar tablet) on the move?

Well like most things the answer isn’t entirely straight forward, and like many areas of law, sometimes depends on the exact circumstances.

If it has a SIM card installed the answer is definitely no, as it falls within the scope of the The Road Vehicles (Construction and Use) (Amendment) (No. 4) Regulations 2003 in that it’s

“a device, other than a two-way radio, which performs an interactive communication function by transmitting and receiving data.”

The law just like with normal ‘mobile phones’ says

“a mobile telephone or other device is to be treated as hand-held if it is, or must be, held at some point during the course of making or receiving a call or performing any other interactive communication function“

So you could quite happily have it in a car mounting bracket.

If it’s a Wifi only tablet, it’s a slightly grey area in that without a wifi connection it can’t carry out an interactive communication function.

Ultimately that would have to be something decided on by a court. It seems quite a legitimate argument that with wifi disabled or without a wifi signal it’s not capable of receiving or transmitting data and so isn’t covered by the regs.

So that covers the specific offence regarding mobile phone use.

You could in theory, remove the wifi and cellular chips from a tablet if fitted and just use a SDCard or something to transfer files off when you returned to base which would be legal so far as the Construction and Use Regulations are concerned, however there is something else to consider.

The mobile phone amendment just added another part to an already existing section of the Road Traffic Act 1988. That section is a long standing ‘catch-all’, and still applies if the device is in a cradle, or  isn’t technically a phone etc etc.

“41D Breach of requirements as to control of vehicle, mobile telephones etc.

(a)as to not driving a motor vehicle in a position which does not give proper control or a full view of the road and traffic ahead, or not causing or permitting the driving of a motor vehicle by another person in such a position is guilty of an offence”

Section 41D, (a) incidentally was rather bizarrely added, and actually just repeats Section 104 of the The Road Vehicles (Construction and Use) Regulations 1986, (as well as adding subsection (b) – the prohibition on mobile phones)

Section 104 says “No person shall drive or cause or permit any other person to drive, a motor vehicle on a road if he is in such a position that he cannot have proper control of the vehicle or have a full view of the road and traffic ahead“

Back before 2007, when mobile phone use, and texting while driving was turning into a hot topic but wasn’t as yet a specific offence, this was what we used to issue fixed penalties for if we saw a driver using a mobile phone and were so minded.

As in my earlier article on the liabilities to ADI’s when supervising a learner , a supervising driver has to ‘supervise’. That means doing whatever is expected to prevent the learner driver from acting carelessly or endangering others.

So are they are in effect covered by S41D? Well the wording only says “driving a motor vehicle” and its clear you’re can’t be driving it from the passenger seat. Motorcycle Direct Access Instructors aren’t in a position to take direct control of the learner, neither are CBT instructors, and in most cases LGV or PSV instructors.  Applying Section 104 to Supervising Drivers seems a stretch to far me, especially as only the driver is mentioned in the legislation.

Even if it was, then stationary with the handbrake applied at traffic lights, or stopped at the side of the road, its unlikely but not impossible there would be a case to answer, as they’d have to show in some way you weren’t in a position to take control.

If you’re driving along conducting a mock test using a tablet you could be deemed not to be in a position to take control of the vehicle, but that’s not an  – No where in the Road Traffic Act or Con & Use regulations does it say that a supervising driver has to be able to take physically control (or be in a position to take physical control), It would seem its all  a very grey area.

Finally, there is also Section 109 of the Con and Use Regulations to consider:

109.—(1) No person shall drive, or cause or permit to be driven, a motor vehicle on a road, if the driver is in such a position as to be able to see, whether directly or by reflection, a television receiving apparatus or other cinematographic apparatus used to display anything other than information—

(a)about the state of the vehicle or its equipment;

(b)about the location of the vehicle and the road on which it is located;

(c)to assist the driver to see the road adjacent to the vehicle; or

(d)to assist the driver to reach his destination.

(2) In this regulation “television receiving apparatus” means any cathode ray tube carried on a vehicle and on which there can be displayed an image derived from a television broadcast, a recording or a camera or computer.

It’s clearly not a cathode ray tube so the section about image derived from a computer doesn’t apply.

But is it a Cinematographic apparatus?

Well ultimately that would be for a court to decide, however  as Cinematography is defined as the science or art of motion-picture photography, and a static image of a test report isn’t moving.  Not only that, the police already appear to accept that a smart phone in a cradle that can be seen by the driver doesn’t come under this offence, otherwise they’d be issuing thousands, if not millions of fixed penalties everyday.  Section 109 was devised to prevent the driver watching a film while driving along. The old fashioned Cathode Ray tube displays were constantly moving, even when displaying a static image as a consequene of how they worked, so were caught within the legislation. LED displays do not move when showing a static image, the pixel is either on or off in simple terms, so again I think it would be stretch to this to apply to them.

Lastly Examiners –  Yes they are exempt from any mobile phone offence as in law they aren’t deemed to be supervising drivers when conducting a Driving Test, so for the same reason if there is a S104 offence they are also exempt.

However, they have no exemption from the S109 offence. So whatever technological means used such as privacy screens etc could equally be used by a supervising driver.

Supervising a Learner – could you be liable?