First a bit of a history lesson and also to clear something up.

“Ok, The Highway code used to say up to 12 o’clock use the left hand lane”

“Ok was it the Essential Skills does”

“Well what lane should I use then?”

First off the “12 o’clock rule” isn’t a bad rule, especially for learners and it generally works.

Despite the British inventing roundabouts and having them since about 1909 though we’ve not always been clear which lane to use for going straight ahead.

Right up until the late 70’s it was common for people to continue straight ahead in the right hand lane.

“To illustrate the difference of opinion four booklets on the subject of driving may be quoted. Two of these state you should approach in the right hand land and steer towards the central island, one says you should keep in the near side lane and treat the curved portion of the roundabout as if it were a straight road through, and the fourth says that either of these are correct…the examiner on test knows how controversial the subject is, if his route includes a roundabout an he wants you to go straight ahead it is extremely unlikely he will fault you for your positioning whichever lane you choose.”

The 1978 Edition of the Highway Code hedges its bets and says:

Flash forward 18 years later to the 1996 edition and we’ve changed from “When going forward” to “When going straight ahead” and seem to have settled on the left lane approach.

When going straight ahead

By 2007 and also unchanged in the latest edition, it’s chickened out totally, after telling you which lanes to use for left and right it and now only says

When taking any intermediate exit, unless signs or markings indicate otherwise

Obviously all this only applies to Roundabouts unless otherwise marked

Which another area of confusion.

In practice roundabout arrows have subtly changed meaning in a lot of cases. 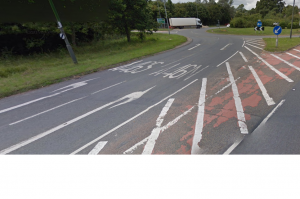 Simple eh? Well not really – There’s a straight ahead option at that Roundabout as well !
But that aside, arrows on the approach to Roundabouts traditionally indicated which lane you needed for the direction you were going in.

The “Right Arrow” is no longer used – The premise being that people will approach the roundabout and immediately try to turn right as if they’re at a T-Junction instead of going around the roundabout. Why that wasn’t a problem for the previous 30 odd years I don’t know – maybe it was ? 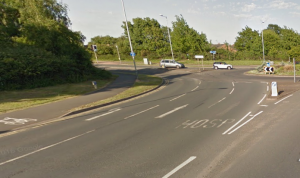 The problem with removing the right turn arrow, can be seen above in Newtown Road, Worcester.

When they originally painted it, there was just that arrow and no “HOSP” wording and no other lane markings on the roundabout!

Naturally this led to people trying to go straight ahead in both lanes at the same time. This causes a slight problem as the exit on the other-side is only wide enough for one!

They then added the HOSP wording, but this didn’t help as people then assumed the Hospital was straight ahead seeing as how it said  HOSP directly below an arrow pointing straight ahead!

As the guidelines prevent a right turn arrow (guidelines which some other councils happily ignore when appropriate) they settled on the compromise that you now see.

They then went ahead and did exactly the same thing at the test centre end of Woodgreen Drive (again you can see the original arrows burned off the road surface) and in a couple of other places. This is because it only works properly where there are lane markings on the roundabout.

Another photo from the A46 – Three lanes all straight ahead arrows! – But wait this isn’t a problem! 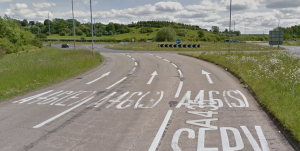 What did you say was wrong with the 12 o’clock rule anyway?

Not much actually but its still open to interpretation. 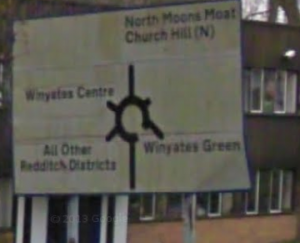 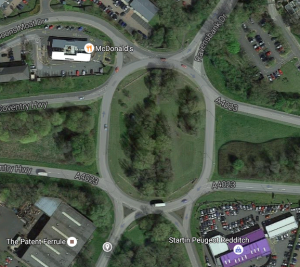 So which is it then?

Easy, as the highway code says – for an intermediate exit choose the most appropriate lane.