“Hi Leigh, What’s your opinion on signalling on Mini-Roundabout – especially when going straight ahead?”

Ok the first part of this is straightforward, the last part causes differing points of view – If the Roundabout looks like the one below, its easily – The Highway code says treat it exactly the same as a normal roundabout.

“Mini-roundabouts. Approach these in the same way as normal roundabouts. All vehicles MUST pass round the central markings except large vehicles which are physically incapable of doing so. Remember, there is less space to manoeuvre and less time to signal. Avoid making U-turns at mini-roundabouts. Beware of others doing this”

As you saw above the Highway Code actually makes no mention of not needing to signal when exiting.

It’s the Essential Skills that adds “there’s often insufficient time to signal left when leaving” and generally there isn’t so you’ll find most people won’t give an exit signal.

If there is time, give an exit signal, but remember it has to flash at least 4 or 5 times to be effective.

If we remove the exit to the left, and you are approaching from the bottom of the picture below, intending to continue straight ahead, what signal should you give? 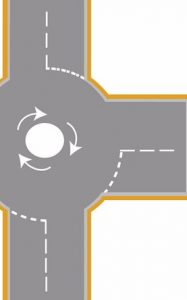 Answer – None – There is no signal in the Highway Code for continuing straight ahead.

If there’s time, once on the roundabout you should give an exit signal to the left, if there’s not, then there’s no requirement.

What about if there’s a car approaching in the opposite direction – Should I give a left signal?

The meaning of a left signal is in the highway code and quite clear :-

“I intend to move into the left, turn left or stop on the left”

So are you doing any of those things?

But won’t it tell the person coming the other way I’m not turning right?

What should tell the person coming the other way you’re not turning right, is that you aren’t signalling to turn right!

Otherwise  when driving down a road you’d signal right every time you approached a junction on the left to show you weren’t turning into it.

How’s it marked on the driving test though?

As above. You aren’t turning left, however if the left signal isn’t misleading then it’s not likely to be marked as a driver fault.  I discussed this exact senario when I did the examiner training at Cardington and the Staff Examiner said he wouldn’t give any signal at all when continuting straight ahead in those circumstances.

Does it really matter then?

Probably not, but the answer above is what I believe is technically and legally correct.

This is also probably related to what seem to be an increasing number of people who approach a full sized roundabout with multiple exits intending to continue straight ahead, while for some reason indicating right in the left hand lane. This is a serious fault as it’s a misleading signal and usually causes the person in the right hand lane on approach to wonder what’s going on, and anyone in circuit with them on the roundabout to expect them to cut across right in front of them.

I thought it was called an Island anyway?

In the Midlands/Shropshire it is-

A playground roundabout physically rotates round and round a central axis in exactly the way a traffic roundabout doesn’t.

An island in the sea, with a palm tree on it, has the ships go round and round the outside of it – exactly the way cars do on a traffic island.