The DVSA  top ten reasons for driving test failure 2015/2016 – I’ve listed them all below, and then further down linked to some examples of the faults from Annex 6 and some thoughts and comments on things I’ve seen over the years.

1) Junctions – (Observation)
Failing to look right, left then right, or looking left, right left, or left then right or some other combination.
Looking left, then right then left, is a fault often not picked up by PDI’s unless they are paying close attention,  as the head movements ‘look’ correct.

This could also be linked to judging the speed of oncoming traffic. Many trainers use the ‘walk across’ rule.

This is incorrect when emerging you need additional time so that you can clear the junction and speed up to fit in with the traffic flow!
Not only that you might be able to cross a road faster than a learner can set off from stationary at the give way line!

Either people aren’t at test standard or are forgetting mirrors. Often because mirror use isn’t sufficiently ‘drilled’.
However PDI’s often take observation at the same time as the learner so they don’t pick up on inadequate mirror use.

Nearside mirror use when returning to the left when passing a parked car?

The nearside mirror is not a legal requirement or even a test requirement. Millions of people took driving tests and drove vehicles quite happily for decades, overtaking parked cars, doing left reverses and everything else without one.

Of course, now we have them we should use them – But when? – The answer is –  to make effective observation

“Any number of unlikely or unrealistic reasons are given without any regard for the situation.

…..If you were travelling at 30 mph to 40 mph in a built up area, it is unlikely that a cyclist could approach from behind, overtake your car on the left passing through a narrow gap at speeds of up-to 40 mph……… A driver should be using their mirrors and exercising hazard perception skills on approach to the parked car to identify any potential problems………..Information obtained from the use of the nearside mirror under the circumstances envisaged might not be of any value as it wouldn’t allow the driver sufficient time to react appropriately……It is better to have a thinking driver who considers all the options and correctly uses or omits a mirror. A driver who automatically uses mirrors in pairs whatever the situation does not necessarily register what has been seen”

Unable to maintain a steady course in normal driving “Swan Neck” turns when turning right.
At a normal stop, mounting and dismounting the kerb
Not following the contour of the kerb at a bell mouth junction Steering too early / late, may cause the vehicle to hit the kerb or swing out towards another road user,
Letting go of the steering wheel,
Looking down when changing gear resulting loss of steering control

I don’t have much to add to this one – other than displaying most of those characteristics would indicate the pupil wasn’t test ready to start with. Some of it may be due to inadequate steering technique – Pull-Push is still the most effective technique. While I’m not suggesting that it be practised to the n’th degree, a reasonable Pull-Push technique will address a lot of these issues.

Not much to say, other than someone consistently doing this isn’t at test standard to start with.

Again not much to say about this one its related to number 4 – Spacial awareness and how to position the car.

Most likely cause of failure for this is simply moving into the path of other traffic.

Ineffective observations – This could be concealed in lessons due to over instruction by the PDI. “Is it clear? yes, go” vs sitting back taking observations and saying nothing to allow the pupil to develop their own judgement.

A note on the ‘seven/six/five point check’ – Neither the DVSA or the Essential Skills has never advised a “six point check” – They have advised effective observations. When training PDI’s if they insist on this, I’ll often ensure to park right next to a brick wall or a hedge on the next stop.

Unnecessary checks when moving off may lead to missed opportunities to go.

The minimum requirement is Centre Mirror, Right Mirror, Right Blind Spot – You should consider if any checks beyond are effective based on the road conditions at the time.

Allowing the vehicle to pull against the handbrake – (too much bite), stalling part way through (maybe connected to failure to set the gas in diesel), rolling backwards on the hill start – usually because they have failed to recognise that they’re on a hill.

Not engaging a gear, or moving off in the wrong gear – Can be a result of failing to drill, “Handbrake on, into neutral” when pulling up to stop on the left.

Note when moving off on a steep downhill gradient, second gear should normally be used – However I have never encountered a test situation where this technique would have been necessary and I leave it to the PDI to decide if teaching this may lead to confusion with the learner.

Aside from the obvious – Puffin Crossing –

RED AND AMBER means ‘Stop’. Do not pass through or start until GREEN shows.

This is not the same as flashing amber on a pelican, where you can proceed if it is safe to do so.

Learners will often attempt to turn right here against the Red Light,  once the straight ahead filter arrow goes green, 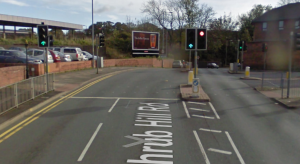 In this example, learners and FLH’s turning right often wait at the STOP line once the light has changed green.

This is incorrect. The positioning can be seen by the vehicles in the middle of the photo.

Not really anything to say on this one.

Massively broad area, Annex 6 only has this to say

It may be the pupil has only had lessons in quieter traffic conditions, then during the test is suddenly confronted with a box junction and is unsure how to proceed or has missed the directional arrows painted on the road on approach realises too late and then tries to correct course. If done correctly that isn’t a fault, neither is continuing in the direction of the arrow as long as its done correctly. Its a driving test not a navigation test. You may however receive a DF for planning.

There are also two things regarding box junctions that now appear to be ‘lesser known’ amongst drivers.