A couple of questions since the previous articles on changing gear, have been about sequential gear changing.

I had a pupil a while ago, who was driving quite nicely and then suddenly started to do this, It transpired the father, who drove an automatic (and not very well) was insistent that this was how you should drive, for reasons that he didn’t seem quite sure of, other than that was how he was taught and ‘in case something happened’

What it was that might happen, and how going one by one down the gears was ever going to help if it did, I’ve still no idea, but the fact that Halfords stock quite a range of brake pads cheaply, and very few transmissions is still lost on a lot of people.

Yes you can stop in the gear in the gear you’re in, No you won’t fail the test for doing it.

Start to brake, just before the vehicle comes to a halt, push the clutch down, handbrake on and into neutral.

That’s how you’re supposed to stop – not demonstrating some eccentric down-change technique last used on steam driven cars in the inaugural London to Brighton Run, so why you’d want to go down the gears one by one when pulling up on the side of the road I’ve no idea?

Some people might feel uncomfortable with stopping from 6th depending on the gearing in the car-  either plan to take an intermediate gear or simply press the clutch down slightly earlier.

And no it’s not coasting if you press the clutch in a bit earlier – your foot should be on the foot brake as you’re coming to a stop anyway,  so the vehicle is still under control.

That aside I can’t think of many occasions when I’d be pulling up to a halt from 6th without having naturally taken a lower gear first to deal with a hazard. 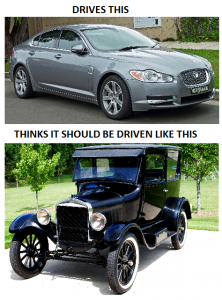 What do I mean by Sequential Gear Changing?

If you are at 30 mph in 3rd gear and are turning left, braking and changing down to 2nd fits the grammatical meaning.

But it’s not what I mean and is not a problem.

Again imagine if you are in a 30 mph zone in 4th with a good view, but the road narrows and there is a lot of pedestrians – as you get closer you change to 3rd, then a few 100 yards later you intend to turn left and drop into 2nd. That’s also ‘sequential’ but also not a problem.

You can change up sequentially without an issue in most cases, in fact Roadcraft originally advised it for progressive acceleration, but these days its quite often suitable to block change from 3rd to 5th when accelerating away having reached the intended speed in 3rd, or for the same reason 4th to 6th, certainly in non-emergency driving.

I don’t usually advocate 2nd to 4th because unless you want to get the rev’s quite high in 2nd you’re going to be coming in at the bottom end of 4th and not going to be accelerating away very quickly, but if the gearing of your car and the speed you need, and the conditions dictate it then why not?

As always the word from the official syllabus :

What does Driving the Essential Skills say?

Actually it says it all over the book in all sorts of sections – Here are a just few quotes:-

“As a general rule, it is preferable and safer to brake to the desired speed and then change down to into the appropriate gear”

“As a general rule, use the brakes to reduce speed before changing down to the most suitable gear for the lower speed”

“The most common examples when changing down are 5th to 3rd, 4th to 2nd and 3rd to first”

“unless you intend to stop, you’ll need to change to a lower gear once you’ve slowed down”

So just like we’ve always taught in Roadcraft – Brakes to slow, gears to go.

“In the early days of learning to drive, it may help you to become familiar with the gearbox if you change down through each of the gears in turn” – If you’re still been taught this after you’ve mastered changing gear, you need to ask why.

What does “Practical Teaching Skills for Driving Instructors” say?

[Update 25/09 – DVSA Approved Book for the Part 3 Exam] – I happened to be looking something else up when I came across this :-

“Barriers to learning – For example two widely held – but false – conceptions are that it is good driving practice to a) always change down progressively through the gears when slowing, rather than using a combination of brakes and selective gear changes and b) always signal for every manoeuvre including moving off, parking and passing stationary vehicles, whether or not there is someone to signal to or who would benefit. When the novice has been influenced by outdated views it is likely to become a barrier to learning and cause conflict with the new information provided by you”

So why is it wrong or dangerous and is it marked as fault?

Well actually by itself, other than being pointless and increasing the wear and tear and your clutch and gearbox by a factor of 3 or 4  its not technically a problem – The problem is, most people who use sequential gear changes, consciously or unconsciously usually use the gearbox to slow the vehicle down as part of the slowing down process as well as or instead of the brakes.

Using the gearbox to slow the vehicle down is a driving fault.

(Unless in some adverse weather conditions, using engine braking down steep inlines etc – as usual there are exceptions)

The gearbox is not as effective as slowing down the vehicle as the brakes, because it only works on the driven wheels and no brake lights are shown to the vehicle behind to indicate that you are slowing down.

So our driver is heading towards a busy hazard, they decide they need an adjustment to a lower speed, so clearly the best way to do this would be by initially slowing down with no  brake lights on and then repeatedly taking one hand of the wheel, to negotiate the hazard, while at the same time actually decreasing engine braking efficiency by repeatedly declutching, all while unbalancing the vehicle, by constantly shifting the mass backwards and forwards?

You can begin to see the problem – If something did ‘suddenly happen’ they’d be unable to do anything about it because they most likely be half-way through a gear change, and their foot is usually on the brake throughout the whole process anyway so they can’t rev match on the down change nor accelerate away in the unlikely event that was needed.

Not only that, but the people who advocate something ‘suddenly happening’ don’t do it either –

If a car ‘suddenly’ pulled out in front of them, do you think they hit the brakes or start going down the gears one by one?

“Its changed from when I learnt to drive”

They must have learnt a long time ago probably around World War 2, when there weren’t driving lessons for obvious reasons – in order teach the influx of civilians  to slow down some of the large heavy trucks, that didn’t have massively efficient brakes it was taught as a technique.

Of course many people would then have gone on after the war and taught their children to drive who carried it on, and so on.

An extract from the original ‘system’ :-

2) Mirrors Signals and Brakes – To ensure safe speed of approach to and at the hazard,

Long before Driving the Essential Skills or even the ADI register itself existed :-

“..slow down considerably in top gear and then change direct from 4th to 2nd, by-passing 3rd gear altogether… this does not jeopardise your chances on the test”

Driving – The Department of Transport Manual – 1979

“It is preferable and just as safe to miss out a gear , for example by changing direct for 4th to 2nd”

“Generally you can stop the car without changing gear, although in some special situations, which we will discuss later it may be necessary to change to a lower gear”

As you can see, its been the case for quite a while…….

Incorrect gear selection, resulting in a reduction in vehicle speed with no risk to following vehicles.

It’s also listed under the control section in main text

Changing down to lower gears when the road speed is too high is not considered an ‘Eco-safe driving’ technique. It uses fuel unnecessarily, as does needless harsh acceleration and using the higher rev range between upward gear changes. Doing so is a waste of fuel with no gain in safety or performance.